One of the more interesting species which you can get up close to while shark cage diving in False Bay is the ragged tooth shark – also known as the grey nurse shark or sand tiger shark. 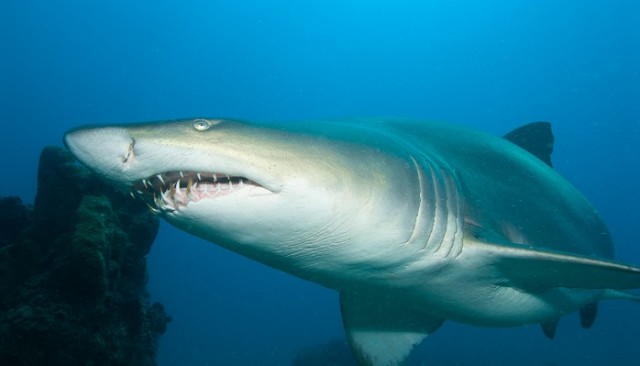 Here are some things you may not know about the ragged tooth shark, or ‘raggie’, as it is fondly known by shark enthusiasts.

2. Unlike other sharks that rely on a swim bladder and a large oily liver to maintain their buoyancy in the water, raggies surface to take great gulps of air into their stomachs, which allows them to stay buoyant in the water with little effort.

3. They prefer shallower waters, which makes them easier to come across during marine adventures such as shark cage diving in False Bay, and elsewhere.

5. Mating among ragged tooth sharks is a dramatic affair as the male needs to swim alongside the female by grabbing her with his jagged teeth, and the females often suffer inadvertent injuries during the procedure.

6. The eggs are fertilised and hatched inside the mother’s body and the female usually gives birth to one or two pups after about nine months.

7. Newly-hatched sharks feed on any other embryos and eggs present until they are large enough to face the outside world.  For this reason, the female continues to produce eggs even while pregnant.

8. Once they leave the womb, the pups are entirely independent of their mother.

9. Although the ragged tooth shark appears extremely malevolent with its beady eyes, hump-backed appearance and needle-like teeth protruding every which way from its jaws, it is in fact a docile slow-moving animal and extremely tolerant of humans in its environment.

10. Although ragged tooth sharks have been known to attack humans, this is usually in error or fear.  The teeth of the ragged tooth shark are used only to secure their next meal before swallowing it whole. This puts the average sized person way out of their league.

Join us for some False Bay shark cage diving to find out more about this rather placid and docile species.